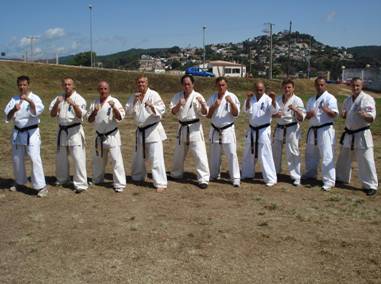 Getting a license was preceded by a recommendation by Shihan József Borza, 6th dan, European Technical Director of IKO Matsushima, where Sempai Sekelj attended the Summer School in 1996 for the 1st dan.

Four months later on the acquisition of the Dojo license, which is temporary, September 28, 2009. Sempai Vladimir Sekelj becomes Branch Chief and Country Representative for Croatia at IKO Matsushima. Since its founding, the Croatian branch has participated in all major events both of European and world-wide Kyokushin Matsushima organizations.

Sempais Vladimir Sekelj and Ivica Stanić participate in the 4th EKO Kyokushin Matsushima summer camp in the Hungarian Miškolc from 04 to 07 August 2009, which is led by Shihan Borza, and where they both passed the exam for 2nd dan.

In the pictures: Sempai Sekelj and Sempai Stanic with Shihan Borza and black belts participating in the 4th EKO Kyokushin Matsushima summer camp 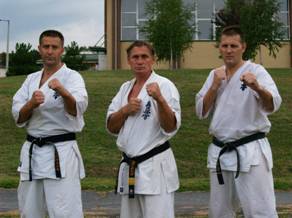 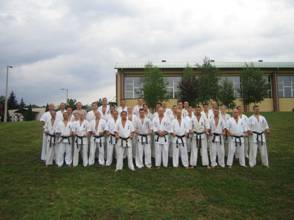 Although Croatia did not have its competitors at the 6th European Open Championship in Italian Gallipoli, the three-member Croatian delegation, Sempai Vladimir Sekelj, Sempai Ivica Stanić and Kohai Natko Skukan, attended this tournament on November 14, 2009. On the second day training was held by Kancho Matsushima and the meeting of the International Committee and the General Assembly of the European Organization on which the report of the Croatian branch was submitted by Sempai Sekelj. On that occasion, the belts and diplomas of the 2nd dan were handed over to Sempai Sekelj and Sempai Stanić. The 3rd World Cup was held in Spain 2010 and the 7th European Open Championship in 2011 in Hungary. In the picture: Twelve magnificent after the tournament “V. Zemplen Cup “on 27. 02. 2010. in Hungarian Satoraljaujhely-u 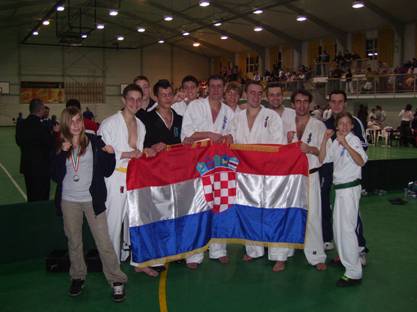 As our clubs are members and one of the founders of the Croatian Kyokushinkai Alliance, the clubs actively participate in the work of the Alliance and Leon Paljušić (KKK “Bregana DIV”) and Ante Bulaja (KKK “Domenica”) make the Alliance representation at the European Youth Championship Kyokushin-kan organization April 2010 in the Hungarian city of Szentes, but this time without much success.

For the 3rd World Cup held on 19 and 20 June 2010 in Estepona – Malaga, Costa del Sol, in the south of Spain, Croatia had a heavyweight competitor, Krunoslav Zlodi, a member of the KKK “Bregana DIV”, who achieved remarkable success by being among the top 16. He was accompanied by Sempai Sekelj, who was also a judge in a lightweight competition. At the time of the World Cup, the General Assembly of IKO Matsushima was held, where South Africa was selected for the next World Cup 2014.

After the World Cup, our representatives attended the training camp on May 21 and 22, 2010, which led Kancho Matsushima in the town of Fuente de Piedra, near Malaga.

In pictures: Sempai Sekelj and Kohai Zlodi with Kancho Matsushima in the Corridor Plaza de Toros de Estepona, where the 3rd World Cup was held and training camp in Fuente de Piedra, June 22, 2010. 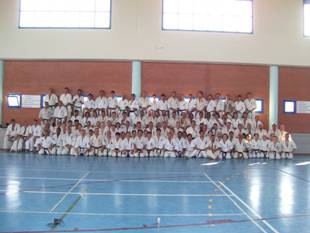 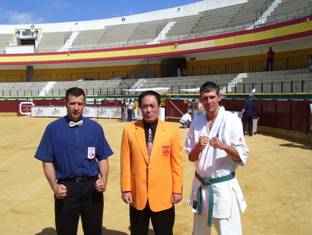 In Hungary’s Karcag, October 30, 2010 at “10. Nagykun Cup ” participated two of our Juniors Ante Bulaja (KKK “Domenica “) and Lovro Mihelić (KKK “Fortis “) but their solid performance was not enough for passing the first round.